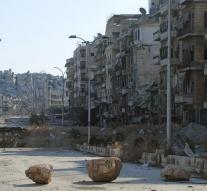 - The UN Security Council vote Saturday on a resolution that Russia and the United States calls a bring cease-fire in the besieged Syrian city of Aleppo established. The resolution submitted by France.

Whether the resolution has, is doubtful. Russia has already said it will veto. 'I suspect that the real motive is to provoke a Russian veto,' said Russia's UN ambassador Vitali Tsjoerkin.

The Syrian army, with the support of Russia and Iran engaged in an offensive in eastern Aleppo to dislodge rebels from the city. Approximately 250 000 people are under appalling conditions fixed in the city.