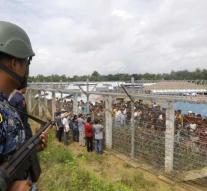 geneva - International investigators blame the Myanmar army for crimes against humanity. Top soldiers from the Asian country must be prosecuted to see if they can be held accountable for this, says a research team that was set up by the UN Human Rights Council.

A huge refugee flow started last year from Myanmar. Security forces intervened with force after attacks by Rohingya insurgents. The researchers state that the way in which the army performed was often in no relation to the actual extent of the safety problems.

'Military necessity can never be a justification for haphazard murders, gang rapes of women, attacks on children and the burning down of entire villages,' researchers report in their report. They believe that a 'competent court' must pass judgment on members of the army top.

The government of Nobel laureate Aung San Suu Kyi is also being criticized. 'There is nothing to indicate that the civilian authorities have used their limited powers to influence the situation in Rakhine,' they write. Suu Kyi would not have used her 'moral authority' to protect the population.