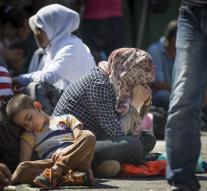 - The United Nations Refugee Agency , UNHCR, has rescued dozens of children in filthy police cells on the Greek island of Kos. There they were detained in appalling conditions .

Refugee children who arrived by boat on the island without the parents or guardians were sometimes weeks detained in the cells, which are smeared with excrement and where they sit together with adult criminals.

Meanwhile, came up with the Greek authorities what to do with the kids. Greek officials told the British newspaper The Independent that they hold the children for their own safety. But according to aid organizations which visit prisoners in Kos, the children were held in medieval conditions. Certainly eleven children still trapped.

The children receive one meal a day, and aid agencies worry that they also get fruit and water. They can not go out and get them handcuffed when they are moved. " It is astonished dirty ", said a volunteer at the newspaper. " There stabbing unprotected electrical wires from the ceiling. There's shit on the floor that runs under the cell door. They have to address through the bars of their food. This is not normally found in Europe. " The United Nations now have an agreement with the prosecution in Kos that children are entrusted in the sequel to the care of an NGO. That organization has its own reception center, funded by the UN.