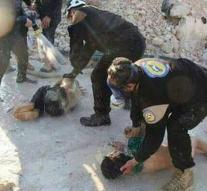 geneva - UN researchers hold the Syrian Air Force responsible for the poison gas attack at Khan Sheikhoun, where 83 deaths fell in April. The armed forces of the regime would also have done dozens of other attacks with chemical weapons.

The UN Human Rights Commission's Syria Commission announced Wednesday that 33 attacks with chemical weapons have been carried out since the start of the civil war. In at least 27 cases, the regime of President Bashar al-Assad would be responsible.

The regime would have run the attack on Khan Sheikhoun. That poison gas attack was in favor of the US to fend off a Syrian air force base with crossroads. The regime has always denied being responsible for the use of chemical weapons in place.