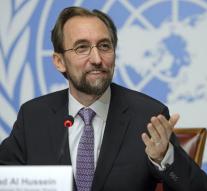 geneva - The High Commissioner has warned Turkey to the UN Human Rights to introduce the death penalty again.

,, The reintroduction of the death penalty creates a break in the commitments made by Turkey with regard to international humanitarian law. It is a step in the wrong direction, 'said Zeid Ra'ad al-Hussein. The High Commissioner called on the Turkish government Tuesday not to turn back the clock in terms of ensuring human rights.

Al-Hussein, Turkey has stated that the country in 2006 adopted a human rights treaty that seeks the abolition of the death penalty. According to international law may come back is not on this decision, as the treaty has been ratified. He also pressed to maintain the heart of law the Turkish government.