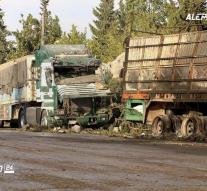 geneva - The United Nations make preparations to resume aid to Syria. Aid supplies were halted after the bloody attack Monday on a convoy near Aleppo. ' The preparations for these convoys resumed and we are ready to bring relief as soon as possible to beleaguered and difficult areas \', told the UN Department of Humanitarian Affairs.

The World Health Organization (WHO) is preparing to bring drugs into a suburb of Damascus. The convoy for Moadamiya ' is chartered today and is scheduled for tomorrow, \'said Elizabeth Hoff, WHO Representative for Syria.

The Syrian Red Crescent has after the attack care in Aleppo province, where an employee Vande charity and twenty civilians left, stopped living. Elsewhere in Syria, the organization does continue her work.