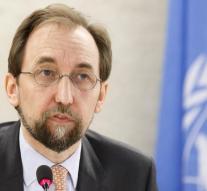 geneva - Ethiopia should allow foreign observers in areas where security forces last week would have shot dozens of demonstrators.

That takes the High Commissioner for Human Rights of the United Nations. The allegations against the security forces must be investigated, said Ra'ad Zeid al-Hussein.

Zeid said to be in agreement entered with the government in Addis Ababa about the arrival of observers. The United Nations has, since the first protesters were killed in January,, having no sincere effort to research and accountability, '' human rights commissioner complained.


Order Troops spent the weekend in the Oromiya and Amhara between ninety and one hundred protesters, reported human rights organizations and the Ethiopian opposition. The demonstrators were gathered together against the expropriations that would be required for the expansion of the capital Addis Ababa.