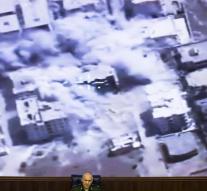 moscow - Russia performs on Thursday, four days for eleven hours a day from any bombardment of eastern Aleppo. However, according to the United Nations enough to get the rebels present so far in the Syrian city of Aleppo to leave.

UN envoy Staffan de Mistura said Thursday that he welcomes the daily fire break to evacuate the sick and wounded from the city. But at the same time he wants the militants from Jabhat Fateh al-Sham get so far as to leave Aleppo. he wants to get done that the Syrian government Keeping the local drivers.

Norwegian UN Adviser for Humanitarian Affairs Jan Egelund hopes that Friday the first 'hundreds' sick and wounded can from the east of Aleppo. They can choose from the west of the city, which is owned by the regime of President Assad, or place Idlib, where rebels have control.

Egelund hopes to expand the fire breaks through Monday. He also noted the absence of an agreement on transportation of food to the besieged eastern Aleppo. The UN is waiting for permission from Damascus.