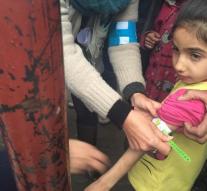 geneve - Starvation of civilians in Syria may be a war crime and a crime against humanity and therefore can never be part of any amnesty. That said, the United Nations human rights chief on Monday.

A number of villages and towns in Syria have been traditionally under siege. Ra'ad Zeid Al Hussein insisted in Geneva that there can be no amnesty for war crimes or crimes against humanity.

Al Hussein drew among others the situation in the city Madaya, which since last year surrounded by the Syrian army. The last time came harrowing images and stories out of Madaya. Some people would already have died of starvation. Fifteen other cities and towns in Syria are like Madaya from the outside world.