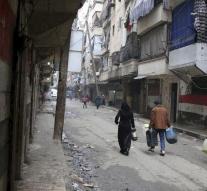 - The United Nations investigate the reports of the use of poison gas in the Syrian city of Aleppo. If the stories are correct, according to UN envoy Staffan de Mistura been a war crime, the BBC reported Thursday.

The British broadcaster has pictures grabbed from a hospital in Aleppo, showing people with respiratory problems. Men, women and children are to see the video with oxygen masks. According to activists in Aleppo gas in a so-called vatbom shed over east of Aleppo, which is in rebel hands. It would probably go to chlorine gas. According to the Syrian regime rebels was behind the attack.

,, There is much evidence that this actually happened, 'said de Mistura.,, If that's the case, we are talking about a war crime. '