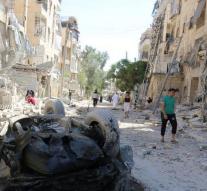 - The United Nations to investigate the bloody attack on a relief convoy near Aleppo.

Ban has put an internal inquiry on the matter. Which will determine what exactly happened and then report to the UN chief himself. Who decides whether the findings to request further action.

The bombing of the convoy that relief supplies had been delivered to a post of the Red Crescent, sealed last Monday the end of the ceasefire in Syria. Which was only a week old and just had to allow the delivery of relief to distressed areas. West accused the Syrian government and its mainstay of the attack Russia.