Home / World / UN: in one month 180 civilian deaths in Yemen 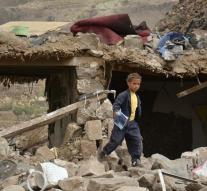 geneva - The High Commissioner has ' deep concern '' in favor of Human Rights of the United Nations about the high number of civilian casualties in the conflict in Yemen. After the breakdown of the peace negotiations fell in the last month, 180 deaths among the civilian population and nearly 270 injured. That's an increase of 40 percent compared to July.

According to the Commissioner for Human Rights in August were at least 41 times schools or health centers, markets, places of worship, airports and homes attacked. The Commissioner called on all parties to abide by international humanitarian law and again called for the establishment of an independent international commission of inquiry.