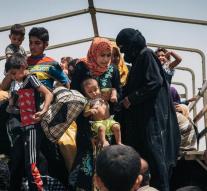 geneva - The United Nations preparing for a huge influx of refugees if the Iraqi army proceeds with an offensive to recapture the city of Mosul in the group Islamic State.

Hundreds of thousands of people can then be displaced, said spokesman Adrian Edwards from UNHCR, the UN refugee agency.

,, The humanitarian impact of the military offensive will be huge, 'said Edwards. UNHCR will need a lot of land for camps to accommodate 1.2 million people in it.


The Iraqi army is busy with preparations IS recapture in cooperation with Kurdish peshmerga's Mosul after two years. Military spokesmen explained to CNN that they want to liberate the second largest metropolis of Iraq by the end of the year.