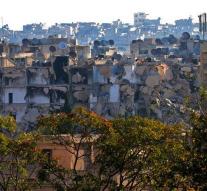 geneva - The United Nations is concerned that the east of Aleppo will be completely destroyed before Christmas. Thousands of people will die and thousands will flee if the battle between the rebels and the Syrian army continues unhindered.

The UN envoy to Syria Staffan de Mistura said Thursday in Geneva not the first time that the world 'has a moral obligation' to end the humanitarian tragedy in Aleppo. Just the last few days have been three hundred people in the east of the city killed execute the bombing Syrian Air Force with the support of Russia.

Russia and Syria, said the Italian ambassador, may themselves sometimes wonder if they a neighborhood in eastern Aleppo with 275 000 inhabitants, including 100 000 children, want to destroy. All that to expel nine hundred thousand rebels. De Mistura said he is prepared to lead if necessary self-rebels from the area.