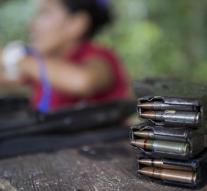 bogota - After fifty years of struggle, the Colombian guerrilla movement FARC has handed all weapons to the United Nations. The 6800 fighters have handed all 7132 registered weapons, let the UN know Monday. For Tuesday, an official ceremony for the termination of the arms transfer in the city of Mesetas is planned in the presence of the FARC and President Juan Manuel Santos.

The weapons are fused to a number of memorial monuments in Colombia, New York at the United Nations and in Cuba, where both parties negotiated peace over four years.

The Guerrilla Movement and Colombia concluded an agreement last year that ended 52 years of war. Around the 6800 rebels are in special zones where they are demilitarized. They wait there when they can return to society. The FARC wishes to continue as a political party and will have ten seats in parliament in the coming years.