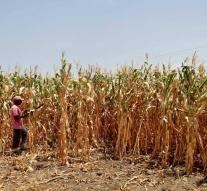 bogota - Approximately two million people in Central America may face severe hunger in the near future. Due to drought, harvests have failed in countries such as Guatemala, El Salvador, Honduras and Nicaragua. Small farmers have therefore not harvested enough to eat and sell, and there is not enough stock left to pass the time until the next harvest.

The World Food Program of the United Nations raised the alarm on Friday. 'Climate-related disasters are more common and cause more damage,' says Miguel Barreto of the food program. In the west of Honduras, for example, 80 percent of the maize harvest has been lost.