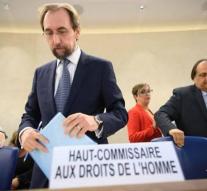 geneva - The attacks of security forces in Myanmar aimed at the Islamic population of the Rohingyas resemble 'a school example of ethnic cleansing'. This has been said by the United Nations High Commissioner for Human Rights, Zeid Ra'ad al-Hussein, Monday.

Jordanian prince Zeid condemned the recent performance of the Myanmar armed forces as a cruel operation that is 'clearly out of proportion'.