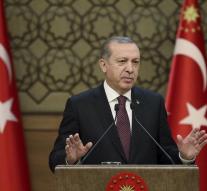 ankara - The UN Special Rapporteur Nils Melzer is on a visit to Turkey, called on the government to adhere to the Turkish policy not to tolerate torture. The Swiss by the human rights organization of the United Nations sent to Turkey to assess the situation following complaints about torture.

That would have happened after the government of President Erdogan in July coup attempt managed to precipitate. Afterwards there was a wave of arrests and echoed reports of torture and other inhumane behavior. Thereby retaining people also includes more than thirty days after their arrest without there is a formal accusation. Even prisoners are too long denied a lawyer. Melzer called these reports 'very worrying.'

The UN rapporteur says to appreciate the state of emergency in the country by the coup attempt, but that in the very first hours and days after the risk of abuse of the rules is high. In the days and even weeks after the 15th of July, according to him widespread talk of torture, harassment and ill-treatment. Melzer also mentioned overcrowded prisons and poor conditions there, says the UN.