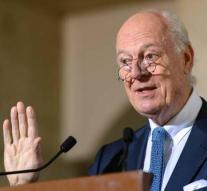 geneva - UN envoy to Syria Staffan de Mistura has responded positively to the cease-fire that various warring parties Thursday agreed in Syria. He said he hoped that through being prevented civilian lives and to deliver relief supplies is possible thanks to the agreement.

Finally hopes the Swedish diplomat now also finally 'productive peace talks' can be conducted. Which are scheduled from February 8 in Astana, capital of Kazakhstan.

The US called the cease-fire is a positive development. A Foreign Ministry spokesman in Washington expressed hope that the agreement 'will be fully implemented and respected by all parties. '' Any initiative to stop the violence, saves lives and creates the right conditions would be welcome to new and fruitful political negotiation. '