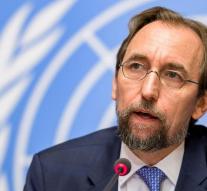 The Venezuelan authorities have been fighting for protesters for a long time against President Nicolas Maduro and his government. The security forces and pro-government groups would be responsible for the death of some 73 people who died since April, UN researchers concluded.

Human Rights Commissioner Zeid said that democracy in the South American country was gradually wiped out. 'It must hardly be alive, if it still exists. That's the way I'd look at it, 'he said.