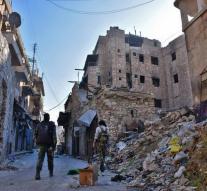 - The General Assembly of the UN on Friday adopted a resolution calling for an immediate cease-fire demanded in Syria. Furthermore, workers should have access to all besieged areas such as the city of Aleppo.

Whether the mood will get something remains to be seen. 'Expect this or other causes dramatic turnaround is not realistic,' for example, explained the UN ambassador from Russia, an ally of the Assad government in Syria.