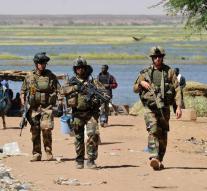 new york - The United Nations cuts a lot on the budget for the current sixteen peace missions in the world. The General Assembly voted on Friday in New York (local time) with a discounted of 523 million euros.

The budget thus amounts to about 6.4 billion euros. Especially the United States had demanded a discount on the budget. EU countries wanted to cut less.