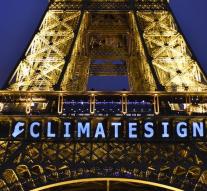 The environment agency released Thursday from the Emissions gap report. It states that that global CO2 emissions in 2030 is expected to be approximately 54 to 56 gigatons. That is much more than the 42 gigatons in order to maintain the temperature rise in this century below 2 degrees.

If the temperature increase below 2 degrees, which scientists will have the opportunity to include violent storms, longer droughts, and rising sea levels make it smaller.

' We are going in the right direction, '' said director of the Environment Agency, Erik Solheim. ' The Paris Convention will slow climate change, but it is not enough to stop it. ''

He warned ' avoidable human tragedies 'in the form of hunger, disease and conflict as a result of global warming. Solheim called earlier to take action. To start at the World Climate Conference Monday begins in the Moroccan city of Marrakech.