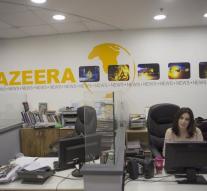 geneva - The United Nations considers it unacceptable for Arab countries to demand the closure of Al-Jazeera news channel. A spokesperson for UN Human Rights Commissioner Zeid Ra'ad al-Hussein spoke Friday about an 'attack on the right of freedom of expression and expression.'

The demand comes from Saudi Arabia, the United Arab Emirates, Egypt and Bahrain, which are triggering a conflict with Qatar. Among other things, the countries want the government in Doha to maintain less close diplomatic relations with archival rival Iran and the Al-Jazeera news channel located in Qatar.

The Human Rights Commissioner clearly made 'deep concern' about that demand on Friday. His spokesman stressed that millions of people are watching Al-Jazeera, which broadcasts both in English and Arabic. He called the sender 'legitimate. '