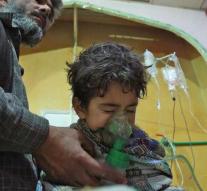 geneva - The Secretary-General of the United Nations called on the warring parties in Syria to observe a cease-fire. 'East Ghouta can not wait. It is high time that this hell on earth comes to an end ', said António Guterres against the Human Rights Council of the UN.

The UN Security Council took a resolution on Saturday for a 30-day ceasefire in Syria. However, on Sunday, bombs would also have fallen on East Ghouta, where according to the UN hundreds of thousands still live. Guterres said that UN agencies are ready to evacuate injured from the Damascus area.

Last week, hundreds of people were killed in East Ghouta due to heavy shelling and bombing. Government troops besieged that rebel enclave for years. The insurgents in East Ghouta would in turn attack the capital Damascus.