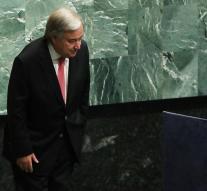 new york - UN chief António Guterres called on state crafts in the North Korea issue on Tuesday. 'It's time to act as state men, because we can not walk to a war,' he said. According to observers, the criticism was based on the policy of US President Donald Trump.

Guterres also seemed to give Trump a pitch under water in the climate. He spoke about the need to leave the 'path of suicidal emissions'. 'We know today enough to get into action. The underlying science is not questionable, 'he said.

Trump and Secretary General Guterres will both speak for the first time to the UN General Assembly this week. Both got their job starting this year.

Ex-Prime Minister of Portugal Guterres identified seven major challenges in his speech to world leaders in the face of the world. These included terrorism, ethnic violence in countries such as Syria and Myanmar and cyber attacks, which he labeled as 'the dark side of innovation. '