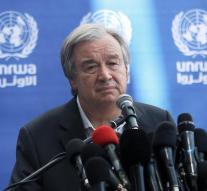 new york - Secretary General António Guterres of the United Nations has shown off Thursday on the victims and immense damage caused by Hurricane Irma in the Caribbean.

In a statement issued in New York, Guterres expressed his sympathy with the residents and governments of the affected countries and territories. He praised the authorities, who were well prepared and responded well. Irma is the most powerful tropical storm ever recorded in the region.