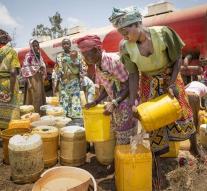 geneva - Nearly a third of the world's population has no reliable clean drinking water according to a new UN study. That is 2.1 billion people, the World Health Organization (WHO) and the UN Children's Fund UNICEF reported Thursday.

For sewage, the situation is even worse: only a quarter of the people worldwide (1.9 billion people) have toilets connected to sewerage and sewage treatment. In many places, even in schools and hospitals, there is also a lack of water and soap for washing hands.

'Clean water and sanitation should not be a privilege for the rich and the people in the cities,' said WHO Director Tedros Adhanom Ghebreyesus. 'All countries have the duty to ensure that residents have that. 'Polluted water and lack of sanitation can cause illness and even death.