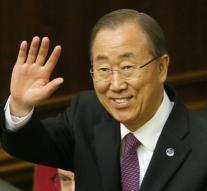 geneve - As a result of the numerous bloody conflicts around the world, the United Nations and the Red Cross Saturday for the first time made ​​an urgent appeal. The two international organizations are calling on governments to more effort to protect the civilian population. "Despite the appalling atrocities the world reacts with irritating doing nothing," lamented UN chief Ban Ki-moon.

The boss at the Red Cross, Peter Maurer, pointed out that " we seldom been so many people have seen on the run, have so much instability and so much suffering seen ".

An estimated 60 million people have gone out of their homes because of war. That is the largest number since the Second World War. In Afghanistan, Iraq, Yemen, Nigeria, Syria, Southern Sudan and elsewhere combatants adhere not even the most basic principles of humanity. " We are therefore now speaking with one voice and ask to put all governments take immediate steps to alleviate the suffering of civilians ", said Ban Ki-moon and Maurer.