Home / World / UN Ambassador VS: We do not want war 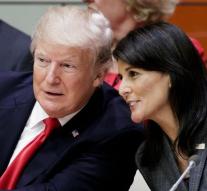 washington - US President Donald Trump is not on war with North Korea. The United States still hopes for a diplomatic solution to the conflict, US UN Ambassador Nikki Haley told CBS.

Trump warned at the UN General Assembly Tuesday that he could be forced to act in military action against Pyongyang. 'If we are forced to defend ourselves or our allies, we will have no choice but to completely destroy North Korea (see video),' he said.

Haley stressed Wednesday that her country does not want to expel the North Korean regime. 'We want to put an end to testing and nuclear production,' said the top diplomat, who stated that the international community simply does not know how to 'draw attention' from dictator Kim Jong-un.

That also puts Washington in a dilemma in dealing with Kim. 'You can only continue to explain what can happen if he does not stop,' said Haley. She also said that 'we have a lot of military options' and that the destruction of North Korea is not the first step on the escalation ladder.