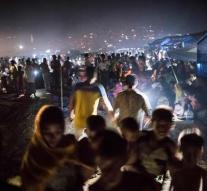 geneva - More than 11,000 Rohingya refugees were pulled from Myanmar to Bangladesh on Monday. That confirmed UNHCR UN Refugee, which announced with the local authorities to set up a temporary shelter center.

A spokesman for the High Commissioner for Refugees spoke in Geneva about a sharp increase in the number of refugees crossing the border. 'We are in a situation where we have to hit a big alarm because of the inflow,' he said.

Since the end of August hundreds of thousands of Rohingya Muslims crossed the border from Myanmar. They have moved into huge refugee camps. The World Health Organization began Tuesday to vaccinate the displaced Rohingya against cholera.