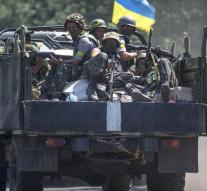 Savtsjenko hopes the pro-Russian separatists in eastern Ukraine as moving to release their Ukrainian prisoner of war, she said Tuesday.

The 35-year-old pilot, who in Russian captivity repeatedly for a time refused to eat, even in May was exchanged against some Russians captured by Ukraine. The Minsk peace agreement contains a similar arrangement for dozens of prisoner of war made in the ongoing conflict since early 2014, but the warring parties lights constantly going on with that agreement.

Savtsjenko, who now sits in parliament, accused President Petro Poroshenko of laxity. She called to demonstrate relatives of prisoners Ukrainians on Monday at his official residence.