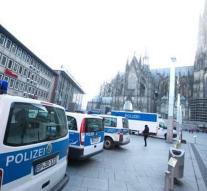 eggenfelden - A dead fall in a German asylum-seekers center in the town of Eggenfelden in the state of Bavaria. A 28-year-old Ukrainian was attacked by his roommate in such a hurry that he died on his site injuries.

The perpetrator is a man (47) from Kazakhstan. He is arrested and is guided on Sunday. What the men argue about is not yet known.