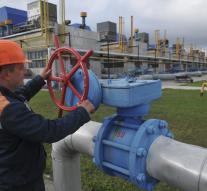 Kiev has decided to prohibit all flights by Russian Ukrainian airspace. Direct flight connections, Ukraine had already shut down between both countries.

The relationship between the two countries gets worse at a rapid pace. Russia accuses Kiev of them doing too little to restore the electricity supply in the Crimea. Strangers had last weekend powerlines inflated causing parts of Russia annexed the peninsula in the dark came down.

To punish Moscow announced Tuesday to stop gas supplies, formally because Ukraine has not yet made ​​payment for gas supplies. The Russian Energy Minister Alexander Novak also threatened Tuesday to suspend the supply of coal because Kiev does not cooperate in restoring the power supply.