Home / World / Ukraine does not receive sponsorship for a song festival 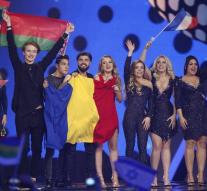 kiev - The Ukrainian state group tries to recover a deposit that has been paid for organizing the Eurovision Song Contest in vain. Ukraine held the festival in May and paid EUR 15 million to the European Broadcasting Union (EBU).

The Ukrainian broadcaster Zurab Alasania has announced Friday that the deposit in Geneva has been frozen. Alasania said that a Swiss law firm was turned on to find out why the money was blocked.

Ukraine states that the festival has been successful and wants to return the deposit. The main incident around the festival was the decision of Kiev to not allow Russian entry, singer Joelia Samojlova. The EBU offered the Russians to participate in outside of Ukraine via a video link.

In May, the Portuguese singer Salvador Sobral won. The Netherlands became eleventh.