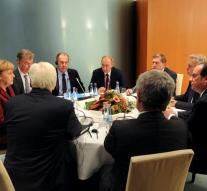 - In Ukraine talks in Berlin, according to Ukrainian President Petro Poroshenko agreed a plan for peace. In addition, there should be an armed police mission in Donbass. That said Porosjenko after a five-hour meeting between the leaders of Germany, France, Russia and Ukraine.

The plan for peace must take as an example the peace agreement in Minsk. The intention is that by all relevant ministers by the end of November, drafted the peace plan. All the details for the armed police mission will be discussed in the words of Porosjenko with the Organization for Security and Co-operation in Europe (OSCE).

Moreover, the parties would have agreed that Ukrainian and Russian troops withdraw separatists in Donetsk and Lugansk. That would pave the way for elections in the separatist region.

The violence in eastern Ukraine began in 2014. There have since been almost 10 000 deaths.