Home / World / Ukip politician: 'I have not touched him' 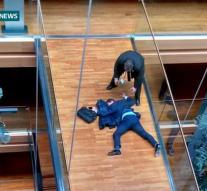 strasbourg - UKIP MEP Mike Hookem denies having touched his colleague Steven Woolfe during an argument earlier today. Woolfe collapsed after that fight together and was rushed to the hospital.

The two had only a 'altercation' says a spokeswoman for Hookem against British media.

The 49-year-old Woolfe would be during the collision cases and bumped his head. Two hours later, he collapsed in a corridor of the Parliament in Strasbourg. He was rushed to the hospital.

Initially it was feared that Woolfe had serious it was, but later in the day, a message that he felt 'lighter.' In a statement, he said that there was no thrombus can be seen on scans of their brains. He left for the security or a night in the hospital.\n  \n  \n   advertisement

The quarrel arose according to sources from the Daily Mail after Woolfe had said that he might want to join the conservatives Theresa May. Hookem would have said that Woolfe was a 'joke' after Woolfe took off his jacket and suggested to continue beyond the quarrel.

'They had words, and suddenly they both had removed their jackets and went to fight out,' said a source within the party against the newspaper. During that fight Woolfe would have hit his head.

UKIP leader Nigel Farage said the two behavior 'is not very appropriate, 'but refused to go into the circumstances surrounding the fight. He said the matter will sort out further before it takes action. Farage stepped after 'Brexit' referendum as UKIP leader, but takes temporary charge since his successor Diane James, two days ago after only eighteen days leadership stopped it.