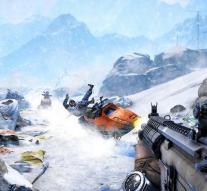 - Game publisher Ubisoft has announced three or more new games during the presentation of his latest annual figures. It's about Far Cry 5, The Crew 2 and a new game in the Assassin's Creed series.

For fans of these series, the announcement of new parts will not be a surprise. For example, images have been leaked from the latest Assassin's Creed and previous parts in the Far cry series made it so good that a new part could not be left out.

It is remarkable that the company continues with The Crew. The racing game was not received very positively at the time, but it was long supported with additional content.

Details about the new games have not been announced yet. It is clear, however, that the games will be released in the coming financial year, so that is before April 2018.