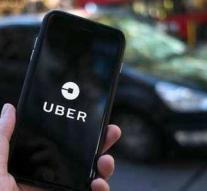 denver - A driver of a Uber taxi has shot his passenger. That happened Friday in the American city of Denver. They had got into a fight, but that is not known.

After the fatal shots the taxi collided with a concrete wall. The driver was slightly injured. He was taken to a hospital for inspection. According to local media, the driver has not been arrested for the time being.