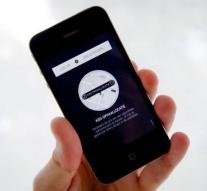 san francisco - Taxiapp Uber is again under fire. The company would set up a secret program to remain invisible to authorities. As Uber could go unseen to work in cities where it is not yet allowed. The project, Grey Ball is called, is used inter alia in Australia, China, Italy and South Korea and in cities such as Paris, Boston and Las Vegas.

The New York Times has revealed the existence of Grey Ball Friday. It began in 2014 and would be used to this day. Thus, an inspector in the city of Portland, posing as a customer to check for Uber was secretly active, see nepauto on the screen of his phone. And Uber drivers who he calls it, the ride canceled almost immediately. He finally failed to catch Uber.

Uber could do that include a 'geofence' to put a government office. Then spied Uber which users around such a place opened the app and quickly ENDED again. That would indeed prove inspectors. Uber also looked at credit card information.

Another part of the program: search for the cheapest mobile phones that were in the stores in a city. Uber namely suspected that inspectors would buy dozens of phones simultaneously, so they could create several fake accounts. Uber and guessed that they would choose the cheapest devices therefor.

Another way: social media scour in search of information about users. For example, if someone on Facebook indicated they work for an inspection, Uber put in the code of the word Greybal that account. Then got to see the user's ghost cars. And if he managed to get a ride, Uber called quickly to the driver to abort the ride.

The project would have begun to protect drivers from violence. Uber drivers were attacked including France, India and Kenya by regular taxi drivers. But when Uber expanded, the company would have realized that the same strategy worked against the authorities.

Uber said in a comment: 'The program refuses journeys of users who violate our conditions, whether it be people who want to harm our drivers, competitors who want to disrupt our work or opponents who set up covert operations to catch drivers. '

Uber gets the last few weeks a lot of criticism. It would take little action against sexual harassment within the company, would make abuse of a taxi strike and would have stolen knowledge of a competitor.