Home / World / U2 canceled St Louis concert due to riots 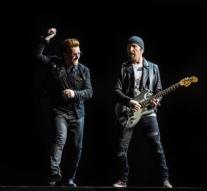 - The concert that U2 will give Saturday evening in Saint Louis does not continue after riots. The concert organizer Live Nation and the band have stated in a statement that they can not guarantee the safety of the public.

In the US city earlier riots broke out after a white former police officer was released from a black suspect's assassination. The police put tear gas and rubber bullets in collisions with the protesters.

U2 wanted to perform at the Dome at America's Center, with a capacity of 70,000 visitors. People who bought an entrance ticket get their money back, reports Billboard.

Other concerts in the area are ongoing, including Ed Sheeran's concert in Scottrade Center on Sunday evening.