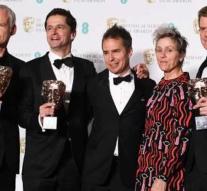 - \u0026 # x27; Three Billboards outside Ebbing, Missouri \u0026 # x27; was voted best film in London on Sunday evening at the annual awards ceremony by the British Film and Television Academy (Bafta). It was presented this time by actress Joanna Lumley at the Royal Albert Hall.

The film by director Martin McDonagh was also awarded for the most original script and, moreover, leading actress Frances McDormand received the Bafta as the best actress. Gary Oldman was honored as the best actor for his convincing work in 'Darkest Hour'.

Allison Janney (I, Tonya) and Sam Rockwell (Three Billboards) were allowed to come forward for the best supporting role. The prize for the best direction went to Guillermo del Toro (The Shape of Water).