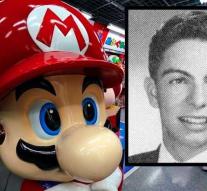 seattle - The American businessman Mario Segale died at the age of 85. In the eighties he rented a building to gamemaker Nintendo. The Japanese had a rent arrears, but managed to persuade Segale not to deport them. As a thank you, the company decided to name the protagonist from his next game to him.

That became a musty and plump Italian plumber: Super Mario. ' I am still waiting for my allowance '', Segale once said.

The BBC and the local newspaper Auburn Reporter report the death of Segale.

Super Mario was first in the game Donkey Kong. His name was Jumpman. When he got his own game, Nintendo decided that Jumpman should get a real first name. Super Mario is one of the most successful game series of all time.