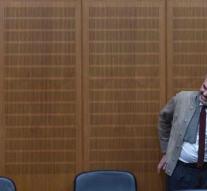 frankfurt - The court in Frankfurt Wednesday a 64-year-old Swede, nicknamed the 'Laserman', sentenced to a life sentence for murder, committed almost 26 years ago. She felt it proved that John Ausonius, on February 23, 1992, was waiting for a cloakroom lady on her way home and shot her a bullet through her head. He had it on her handbag.

According to Bild he defended himself by saying that the victim had stolen his pocket diary. Ausonius has been imprisoned in Sweden since 1994 for murder and multiple attempted murder. Before he fled to Germany, he shot for months at the beginning of the 1990s with a rifle equipped with laservizier on migrants. Mass murderer Breivik (2011) was inspired by him.

Ausonius would soon have been released, but now he ends up in a German cell. Moreover, the accused is locked up in a strictly secured penitentiary institution.