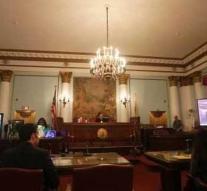 new york - The man from New Jersey who committed bombings in the Chelsea district in New York in 2016 was sentenced to life imprisonment. That's what the US Department of Justice announced on Tuesday.

The federal judge in Manhattan found the 30-year-old Ahmad Khan Rahimi guilty of all eight charges in October. Underneath it to detonate a pressure cooker filled with scrap. Thirty people were injured.