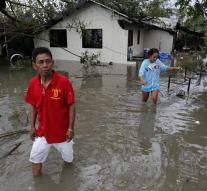 manila - Typhoon Nock-Ten or Nina, who Sunday reached the Philippines, has taken at least one person's life. One man was hit in the Quezon province by a tree, local media report on Monday.

The typhoon which has since been watered down somewhat, is moving towards capital Manila. Nock-Ten came to town Bato ashore and has mainly led to property damage. Fallen trees blocked roads and provide part of the electricity network is down.

In 38 provinces assumed a storm warning. Certainly 300. 000 people had to spend Christmas in emergency shelters.