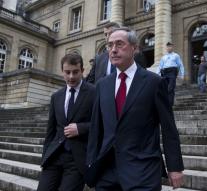 The former director general of the national police, Michel Gaudin, received a suspended prison sentence of ten months. In addition, three other accomplices who have worked at the ministry, was sentenced to eight months probation and fines ranging from 20 000 to 40 000 euro.

The court considered it proven that between 2002 and 2004 irregular bonuses paid to the ministry where as the later President Nicolas Sarkozy was minister. Guéant was then private secretary and right hand of Sarkozy. Guéant was there in 2011 and 2012 self minister. The money was paid in cash.

It would have been a total of about $ 10,000 per month and would be sustained 21 months. The money came from the police Gaudin who staged as special costs to secure the ministry.