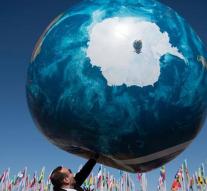 marrakech - Climate agreement reached must be worked out completely in two years in Paris in 2015. Nearly 200 countries arrived in the night from Friday to Saturday until the decision in the Moroccan city of Marrakech. Since the last two weeks took place a climate summit. The Moroccan prime minister told a press conference that was begun with the summit in his country by converting the promises of Paris into action.

No later than December 2018 should be clear how Paris climate agreement in practice will be continued. The major lines set out then get their seizure in an official document in which all the details are recorded in Paris. Examples of these details are how countries will report on their actions to reduce greenhouse gas emissions and how they should go check.

At the end of the summit, which was extended by one day, several participating countries called on the future US president Donald Trump on another good think about the importance of participation of the United States at the climate agreement. Republican real estate magnate has the global warming said a Chinese fabrication.

The prime minister of Fiji Trump to get invited to the islands to see with their own eyes what the implications of rising sea levels and more powerful storms. Fiji is chairman of the climate summit to be held in November 2017 in Germany.

Two years to work out the details of a deal sounds long, but is relatively speaking it. For example, it took four years to capture the details of the 1997 Kyoto Protocol. In the Japanese city was decided that developed countries were to reduce their emissions. The Paris Agreement contributes to reduce all participating countries on their greenhouse gas emissions. The developed countries must from 2020 year $ 100 billion (more than 94 billion euros) to contribute to a fund to help developing countries finance their climate actions.