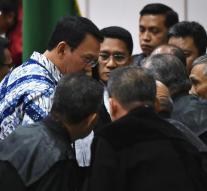 jakarta - The Christian governor of Jakarta, Basuki Tjahaja Purnama, has been convicted of blasphemy because he would have offended Islam. He has to enter the cell for two years, announced Tuesday.

The lawsuit is seen as a precedent regarding religious freedom in the country.

The process is about the statements made by Purnama, also known as Ahok, last year against his opponents. He would have spoken about the Quran in his political campaign for governance. Many Muslims and especially the radicals, offended their remarks and called for the resignation and prosecution of the governor. They did report and mass protests followed.

Purnama, the first ethnic Chinese and Christian leader of Jakarta, has always contradicted the allegations of blasphemy. He announces that he is appealing.