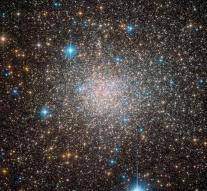 - In the universe are far more galaxies than previously thought. European and US scientists have done a count together and came up with at least two trillion (2000 billion) of such systems. That is ten to twenty times more than had been assumed until now. Our Milky Way is one of them.

The European Space Agency and the Space Telescope Science Institute have it announced Thursday. The Institute leads the mission of the Hubble Space Telescope, which is used for the study, which lasted fifteen years. The Hubble measurements made a three-dimensional map of the universe.

About 90 percent of all systems is too far away from us and radiates too little light. Thus, they can not be seen directly. They should exist, researchers have deduced from other measurements. Future space telescopes systems can perhaps see.

The total number of galaxies must be even larger than the two trillion. The researchers were able to look only in the so-called observable universe. That is the part of the universe from which the light has been able to reach the Earth. Beyond that border the universe exists, but the light of these systems is still on its way to us.

The researchers also discovered that there were once more galaxies. When the universe was a few billion years old, there were about ten times as many galaxies as now, 13.7 billion years after the Big Bang. This is probably because galaxies have merged.